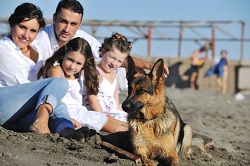 When I was a small girl I had a cute little puppy at my home. Initially I was very scared of all dogs. But later we became good friends. I named the dog Tommy and he was very attached to all at my family. But he was scared of my grandmother.

We used to go for evening walks every day. He would run and chase cats, crows and pigeons. When I come from school he would come running to me and would run around me and nibble my fingers. I liked the way he came running to me.

When I am at school his favorite pass time was enjoying the sun, taking a long nap and watching TV along with my mother. He was also a great entertainer. I would say a family entertainer. We have a family photo in which he was also present.

During night time even if he was left outside the house he would sneak back inside and to my room and sleep near my bed. The funny thing is that when ever our neighbor’s cat came to our compound Tommy would run behind and chase that poor thing. I think he really hated that cat a lot. But that poor thing liked to play with him.

He liked ice creams a lot, there is an ice cream vendor who comes to our flat every day and he used to give him ice cream some times. He was very friendly with my friends also and when I went with my friends to beach, we used to take Tommy also. He used to enjoy the car ride to beach a lot.

I would like to share an experience with my dog I had when I was in 5th grade. Once when we were watching TV a story based on dogs, Tommy liked watching TV. But on that particular day when the story was finished, he actually went behind the TV and started searching for the other dog. That day we all laughed a lot.

One day when I came from school he was not waiting for me and I looked for him a lot. I could not find him and when I asked my mother where he was. She told me that he met with an accident when he went to the ice cream vendor and was dead. I really felt bad and didn’t even go to school for 2 days. Later my parents got me a new dog, but still I miss my Tommy a lot.