Largest Dog In The World 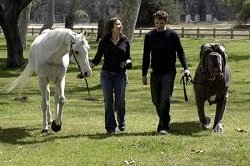 The largest dog in the world belongs to a breed that is known as the English Mastiff, but most people just call this dog a Mastiff. These canines are powerful, loyal and very intelligent.

Although the Mastiff has a very large body it is the broad, square shaped head, with dewlaps and flews, that is the characteristic most people notice first.

There are some dogs that could lay claim to the title of tallest dog in the world such as the Great Dane but the sheer size of an English Mastiff makes certain that everyone realizes it truly deserves to be called the largest dog in the world.

The legs of this dog are naturally wide apart to accommodate the width and weight of the animal's build. According to AKC guidelines the shoulder height of a Mastiff should be 30 inches for a male and at least 27.5 inches for a female dog.

This measurement does not take into account the giant head of these canines which can easily add at least another 12 inches to their height.

There is one English Mastiff today that has already been given the tile of The Largest Dog in the World. This enormous family pet weighs nearly 300 pounds and when he stands on his hind legs he is taller than the height of the average man.

The weight of this dog may seem to be a great accomplishment until you consider that most male Mastiffs have a weight that is in the 150-250 pound range. Females are a little smaller than the males and typically weigh about 120-200 pounds. 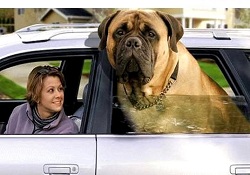 These dogs have short coats that are easily groomed, but there are a few that have longer hair and they are referred to as Fluffies. The most common color is light brown or fawn. The canine that holds the title of largest dog in the world is an apricot and fawn colored Mastiff.

You may also see some silver-fawn Mastiffs or some that are dark fawn and brindle colored. There are even occasional pied Mastiffs that can be seen. No matter what their coat coloring may be the faces of these dogs will always have a black mask that is present. 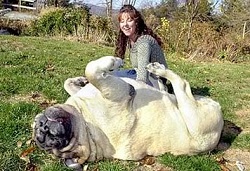 Biggest dog in the world?

This dog breed is susceptible to many different ailments and their life expectancy is only 7-14 years. Their large size means that they may suffer from hip dysplasia and/or arthritis. They can also develop thyroid problems, progressive retinal atrophy or gastric torsion.

During the first two years of their lives Mastiffs should have limited periods of exercise to reduce the likelihood of bone, muscle and joint problems. After all they are still young pups at this time, and they are still growing.

The largest dog in the world that has ever been verified by the Guinness Book of World Records was an English Mastiff whose name was Aicama Zorba of La Susa.

This dog's weight in 1989 was an incredible 338 pounds, and at this time he was just 7 years old. Zorba measured 35 inches tall at his shoulder blades and when measured from his nose to his tail the result was 8.25 feet.

Usually you will find that these dogs are very gentle and calm but Mastiffs are fiercely loyal and protective of their home and family and will give their life to defend them. They do require a lot of exercise and they are happiest when they have a job to do.

Anyone who has owned a Mastiff can also vouch for how well behaved these animals are when dealing with small children or other dogs. A Mastiff may be the largest dog in the world but these gentle giants would rather be peacemakers than warriors.

Largest Dog In The World to Dog Breeds

Thunder Dog: The True Story of a Blind Man, His Guide Dog, and the Triumph of Trust at Ground Zero (Thorndike Press Large Print Core Series)